Inorganic lead is a malleable, blue-gray, heavy metal that occurs naturally in the Earth’s crust. Lead was one of the first metals used by humans and consequently, the cause of the first recorded occupational disease (lead colic in a 4th century BC metal worker).

In 2012, U.S. production of lead was estimated at 1.6 million metric tons; primarily from secondary refining of scrap metal. U.S. mines produced 342,000 metric tons, ranking third in the world behind China and Australia. The U.S. has 14 lead producing plants that account for 99% of U.S. secondary production. Lead can be used as a pure metal, combined with another metal to form an alloy, or in the form of a chemical compound.

The primary use of lead in the U.S. is for automobile lead-acid storage batteries, a type of rechargeable electric battery which uses an almost pure lead alloy. Lead-formed alloys are typically found in ammunition, pipes, cable covering, building material, solder, radiation shielding, collapsible tubes, and fishing weights. Lead is also used in ceramic glazes and as a stabilizer in plastics. Lead was used extensively as a corrosion inhibitor and pigment in paints but concerns over its toxicity led to the CPSC in 1977 to ban the use of lead in paint for residential and public buildings. (osha.gov) 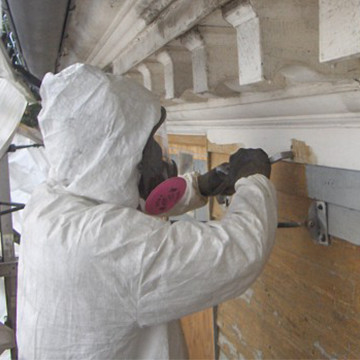